So this guy walks up to another guy at a bus stop.

Guy at the bus stop is on his way to a rehearsal for some sort of theater group…he’s creative and fun that way.

And this guy likes to let loose because he lives in the heart of a conflict and it’s good to live life fully when you never know what the guy who walks up to you at a bus stop might do.

Well, anyway, this guy walks up to this guy at a bus stop.

He’s only been a free man for a bit.  He should be living his life and maybe joining a theater group because he also lives in the heart of a conflict and it’s good to live life fully when you just never know what’s next.

But this guy has a problem because he believes in a code that tells him that if his relative is accused of something it’s up to him to prove the family still has honor.

So he walks up to this guy at a bus stop.

And he stabs him enough times in the abdomen to make sure he will die.

Then he steals his gun, which the guy who is dying at his feet has in order to live his life fully in that tiny place at the heart of a conflict with a bit less fear, and shoots at a bunch of young soldiers, gets himself moderately wounded and arrested.

So the guy is going to live for a little while in a prison where he’ll get an education, food and political promotion and most likely will be traded for something intangible like a good will gesture and his family will have their bloody honor back and all will end well for a guy who stabbed another guy at a bus stop where he was waiting to be picked up for rehearsals.

Evyatar Borovsky was laid to rest along with his full life and dreams of theater while his wife and five children wept and my land twisted and turned and a fire raged on and on in the heart of all this conflict and no one in the entire world said a word about the man who just wanted to live.

So I’m telling you the story about the guy who dared to walk up to another guy who’s name was Evyatar and who had a wife and five children and family and friends who loved him and a life that was full and vibrant and loving and who had to die at the feet of a guy who didn’t give two shits about the life of the man he stabbed at a bus stop in a little place that’s the heart of a conflict that killed a man for daring to live. 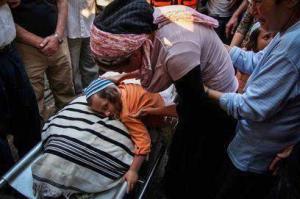 View all posts by colloquiallyspeaking

3 thoughts on “When Conflict Strikes Its Weary Head”

Bracha Goldstein is a writer and an artist shining a light into the deepest corners of her soul, exposing darkness to brilliant rays of sunshine.